TU Dublin celebrated Maths Week with a number of events last week, and celebrated the winner of this year's Hamilton Prize - Yimin Guo.

The School of Mathematical Sciences hosted over 500 school children in Kevin Street to celebrate Mathsweek on Monday 14 October and Wednesday 16 October.  The annual events, held nationwide, encourage not only children but the whole community to get involved in a wide variety of mathematical-themed activities and events, highlighting the influence, importance and fun in maths.

Over a quarter of a million people participate in Mathsweek Ireland annually, and the School of Mathematical Sciences has been a key, active participant in Mathsweek since its inception in 2005. This year the School of Mathematical Sciences welcomed primary school children from Grangegorman, Chapleizod, Blanchardstown, Swords, Maynooth and Tallaght and secondary school children from across greater Dublin including, Stillorgan, Adamstown, Ranelagh, Tallaght.  In addition, the School was delighted to welcome to Kevin Street, once again, the immensely popular Kjartan Poskitt, author of the Murderous Maths children's books, to entertain the participants.

On Wednesday 16 October, Yimin Guo, a final-year student in the School of Mathematical Sciences who is currently studying the programme BSc Mathematical Sciences, received the student Hamilton Prize in Mathematics for TU Dublin.  The Hamilton prize is an award made annually by the Royal Irish Academy (RIA) to the best undergraduates studying mathematics, as nominated by the universities in Ireland.  This prestigious award was presented by Professor Maria Chudnovsky, this year's Hamilton speaker.  Hamilton day is supported by the RIA and by Ibec. 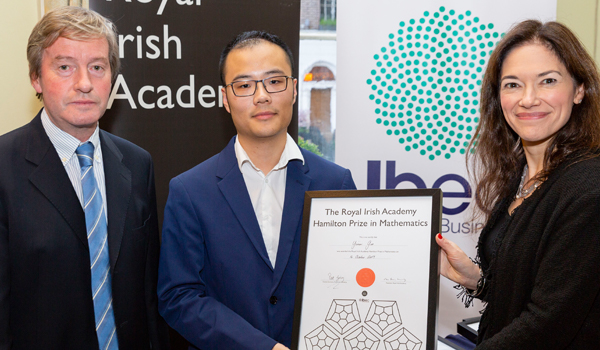 Are you interested in studying Maths at TU Dublin? We have a range of programmes available, including Mathematical Sciences and Industrial Mathematics.