The 2020 Harvey Rosten Award for Excellence in the Physical Design of Electronics was awarded to Dr Sajad Alimohammadi, a lecturer in the School of Mechanical and Desing Engineering at TU Dublin, and Prof. Tim Persoons, an Associate Professor in the Department of Mechanical, Manufacturing & Biomedical Engineering at Trinity College Dublin.

The Harvey Rosten Award is awarded annually in recognition of achievements in the field of thermal analysis of electronics equipment and the thermal modelling of electronics parts and packages. It aims to encourage innovation and excellence in these fields. 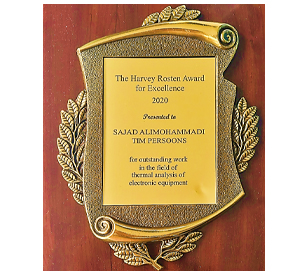 The award is for the best article of the year published among papers presented at conferences, appeared in journals and other original work, documented in publicly available domains during the past 12 months. Several aspects were considered for this award, including originality, practicality, and novelty. The 2020 Award will be formally presented at the 2022 SEMI-THERM Symposium due to travel restrictions by the COVID outbreak.

In air-cooled data centres with fans as the air movers, between 15-40% of the total power consumption is used to run the electronics cooling system. In addition, the operation of the fans involves some of the key challenges in data centre thermal management, such as low cooling efficiency, high noise levels, and operational and maintenance costs. 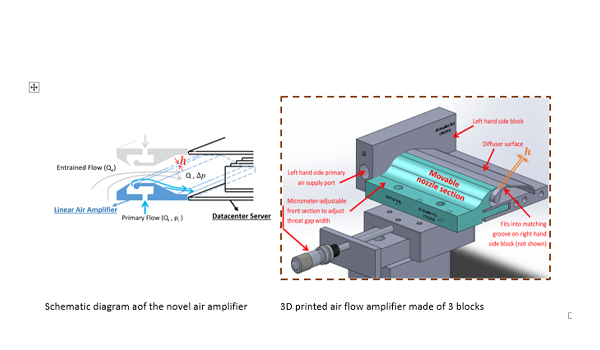 A project called Low Noise Air Amplifiers was the starting point for this achievement, initially funded by the US National Science Foundation (NSF), Industry/University Cooperative Research Centers (I/UCRC) through the Cooling Technologies Research Center (CTRC) of Purdue University and Intel Corporation, from 2015 to 2016. The project aims to design a novel device to replace rotary fans in server rack cooling. The device operates with no moving parts and generates high-speed uniform flow attached to the rack server surface. Investigated from fluid flow, heat transfer, and noise generation aspects, this device has shown high feasibility as a replacement for traditional fans and can help to revolutionise data centre thermal management. The relevant DOI is 10.1109/THERMINIC49743.2020.9420492.

Prof. Persoons mentions, “This project came about following conversations with Intel’s data centre design team, as they were looking for solid-state alternatives to traditional rotary fans. Fan failures are unpredictable, and because modern data centre systems operate close to thermal limits, this requires immediate maintenance. Fans also contribute to the overall energy use of data centres, as well as causing high levels of acoustic noise, which makes for challenging working conditions. We are very grateful for the recognition of the work by the Harvey Rosten Award, and we want to acknowledge the financial support of CTRC at Purdue University and all our collaborators in Intel and Trinity, including Gordon O’Brien, Quentin Pelletier and several other research students who have contributed to this work (including Molly Kenny, Conor Morrow, Manoj Goyal and others).”

Dr Alimohammadi states, “It is the honour of my career to be the winner of the 2020 Harvey Rosten Award together with Prof. Persoons. Looking at the list of previous recipients of this award, I come across a great number of scientists and researchers that I had looked up to as role models in my career from the early stages when I started my research in this field more than a decade ago. The need for radical innovation in compact electronics thermal management technologies is a well-recognised bottleneck for the further expansion of data centre infrastructures in Ireland and around the globe. We are delighted to see this novel device identified by the selection committee of the award and electronics cooling community. I would like to wholeheartedly thank all colleagues and researchers who have contributed to this work, and indeed this is an award to them as well.”

This is an ongoing work to enable more accurate characterisation of the device performance and flow velocity measurements. This research was performed with the support of Dr. Quentin Pelletier (former PhD student with Tim Persoons) and other collaborators in Trinity and Intel. This was also done with the assistance of Gordon O'Brien, Chief Technical Officer at Trinity College Dublin. Regarding the future work, Mr. O’Brien mentions, “it is the challenging design problems like this one that makes the job interesting. Furthermore, enabling researcher by turning basic input like an initial 2D sketch into complex working devices is always rewarding.”