The Conservatoire has developed an active research profile in the areas of historical musicology, performance practice, pedagogy, source studies and composition.  Our staff and students produce a wealth of research outputs that make a significant contribution to our understanding and knowledge of the performing arts.  The diverse nature of the research and performance practice interests of the large staff at the Conservatoire offers opportunities for specialist and interdisciplinary research projects which are not available in smaller university departments.  The Conservatoire has attracted several externally funded scholarships in recent years as well as being successful in attracting students who have been awarded internal TU Dublin Scholarships.

The Conservatoire has the largest music research department in Ireland, and we are home to the Research Foundation for Music in Ireland – the national centre of excellence for the study and performance of music in Ireland.

The Foundation was established in April 2013 to showcase the dynamic musical life of Ireland, manifested in performance, musicology, pedagogy, and composition, and to promote the study and performance of music in Ireland to national and international audiences, to the scholarly community, and to the music industry.

Research Foundation projects include Music at the National Library of Ireland, Music at the Abbey Theatre, the Dublin Music Trade project and, in collaboration with University College Dublin, The Encyclopaedia of Music in Ireland – the single most important publication of its kind in the history of Irish music.

Hosted by DIT Conservatory of Music and Drama, and published by UCD Press in September 2013, the Encyclopaedia of Music in Ireland (EMIR) is the first comprehensive account of Irish musical life across recorded history.  It also documents Ireland’s musical relations with the world at large, notably in Britain, continental Europe and North America, and it seeks to identify the agencies through which music has become an enduring expression of Irish political, social, religious and cultural life.

The project has received support from Atlantic Philanthropies, the Irish Research Council for the Humanities and Social Sciences, NUI Maynooth and DIT Conservatory of Music and Drama.

The Encyclopedia of Music in Ireland is published by UCD Press and is available from the publisher and all good book shops. 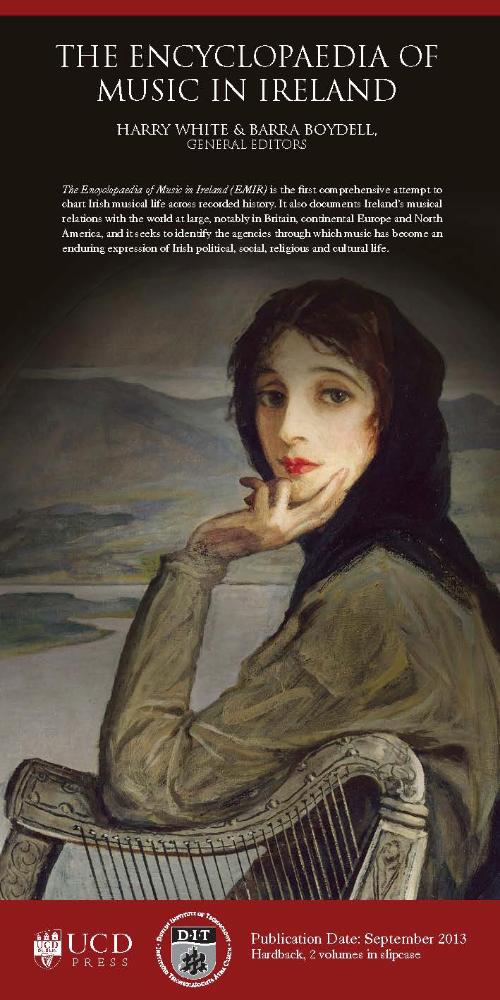 You can access some of the Conservatoire's research outputs via Arrow, here.

Strategic links were established with the O Cleirigh Institute at UCD in 2007 and the first event of the Louvain 400 programme was held in the Conservatoire on 3 February 2007—Musical Journeys with the Flight of the Earls.

This symposium explored the historic background to the ‘Flight’, the musical culture in Ireland at the time and the musical experiences that the Earls would have encountered on their journey. It also explored how the ‘story’ has been recorded in poetry, drama and Irish traditional music. We had an excellent panel of speakers with a broad mix of disciplines and equally divided between those based at Irish and UK institutions. One of the papers will be published by Four Courts Press in Music and Culture in Seventeenth-Century Ireland (Irish Musical Studies, volume 10) ed. Barra Boydell and Kerry Houston.

The Research Foundation for Music in Ireland is delighted to announce the launch of a new free-to-access online resource detailing the who, what, where and when of the historic music trade in Dublin.

The Dublin Music Trade project was initiated by the late Brian Boydell (1917–2000), composer, professor of music at Trinity College Dublin and author of the seminal texts A Dublin Musical Calendar, 1700–60 (Dublin: Irish Academic Press, 1988) and Rotunda Music in Eighteenth-Century Dublin (Dublin: Irish Academic Press, 1992). Over the course of his research, he compiled a card index of music publishers, printers, sellers and instrument makers in Dublin from 1750 to 1850. Publication of this research was planned but never came to fruition.

In the 1990s this research was passed onto his son Barra Boydell, professor of music at the National University of Ireland, Maynooth and expert on the history of music in Ireland with an emphasis on the seventeenth and eighteenth centuries, and on organology and musical iconography. Barra transferred the information from his father’s card catalogue to computer. He developed and expanded the database, planning to extend the research to the end of the nineteenth century. On his retirement in 2010, Barra passed the research onto Dr Catherine Ferris at DIT Conservatory of Music and Drama to develop into an online resource.

While access to the Boydells' research was restricted to those in personal contact with the family, it became a key reference for musicologists, historians, music librarians and archival scholars, particularly for establishing unknown publication dates of scores by cross-referencing dates and addresses of publishers. In bringing the Boydells' research online with the launch of DublinMusicTrade.ie, access to this valuable information is now freely-accessible and fully-searchable.

While the coverage falls primarily between 1515 and 1850, this is only the first step in bringing together information on the music trade in Dublin from the earliest times to the present day.

The editors invite contributions to expand and develop the Dublin Music Trade resource. Details on businesses or surviving instruments/published music are particularly welcome. Post-graduate and post-doctoral research projects on any aspect of the music trade in Dublin are also encouraged.

The Dublin Music Trade has been funded by the Music Libraries Trust and the Society for Musicology in Ireland. It is hosted by the Research Foundation for Music in Ireland and is supported by the Conservatory of Music & Drama at Dublin Institute of Technology.