At a competition and award ceremony in Engineers Ireland last week two TU Dublin graduates won top awards for the final year projects they submitted in 2019 for their degree awards.

Competing against submissions from students from all universities and Institutes of Technology across Ireland, Paul Stanley and Connor Murray came out on top and each were presented with prizes of €500 and a Certificate of Recognition of their achievements. Paul graduated in November with a Masters in Mechanical Engineering (TU204) while Conor Murray graduated with his Bachelor of Manufacturing & Design Engineering (TU823). Both graduates completed their studies in the School of Mechanical and Design Engineering in Bolton Street. The Award ceremony was organized by the Mechanical /Manufacturing Division of the Institution of Mechanical Engineers.

Paul’s project was titled CFD Analysis of Chlorine Contact Tank Flows. A summary of the project explains: “Contact tanks (CT) are large tanks used in water treatment plants. In a chlorine CT, water is transported to the tank where chlorine is added, causing oxidation and killing most of the pathogenic micro-organisms present. Most existing chlorine CTs suffer from several drawbacks, e.g. dead spaces, which subsequently exert unnecessary chlorine demand. The aim of this numerical study was to analyse the fluid dynamics of a chlorine CT using the open source CFD software package OpenFOAM. Predictions demonstrated that computational methods can be invaluable for the simulation of chlorine CT flows, as they can reproduce real-life conditions to a satisfactory extent.” 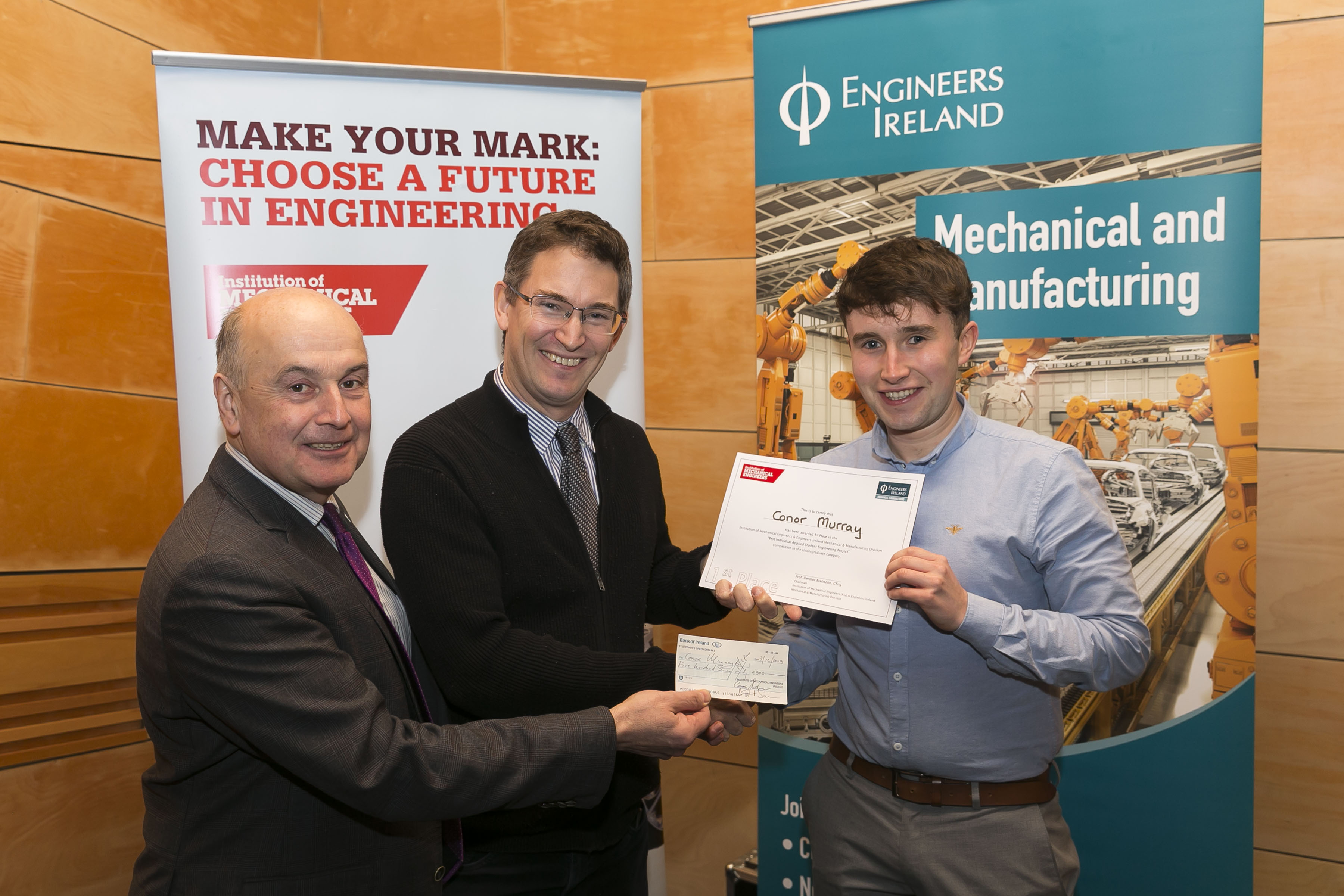 Conor Murray’s project was entitled: Safety mechanisms for quick couplers and Excavator attachments. The following is a summary of the winning project:

“This research examined the safety mechanisms on the Dromone quick coupler and through the use of passive technology (RFID) and mechanical redesign, developed a quick coupler with improved overall operational safety. Dromone Engineering are a manufacturer of quick couplers and excavator attachments. The traditional locking system was operated mechanically and there were no interaction with the driver to confirm the excavator was in a safe position to release attachments. A safety control system together with a driver display/interface was implemented to ensure that all safety criteria were met before release or operation of any attachments. A prototype was designed, manufactured and tested at TU Dublin and Dromone Engineering and the concept is now being commercialised.”

For further details on our undergraduate and postgraduate programmes in Mechanical Engineering, go to tudublin.ie/study/